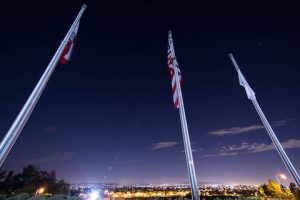 Outside Boston City Hall stands three flag poles. The American and Massachusetts state flags occupy two of the poles, while the third pole is available for the public to use during ceremonies. Since 2005, Boston had approved 284 ceremonies which included 50 unique flags such as the Pride Flag, flags honoring medical and other service workers, a flag from a local private bank, and flags of foreign nations. Boston consistently granted applications to use this flag pole without exception.

However, in 2017 the city suddenly changed course and refused to allow Camp Constitution (a Christian group) to use the flag pole for a Christian-themed flag. Despite having never denied a group before, Boston defended its decision by claiming that a Christian group’s use of the flag pole would violate the establishment clause (separation of church and state). Boston alleged that allowing a religious flag to fly on city property would amount to government sponsored religion.

Camp Constitution sued Boston arguing that the group’s First Amendment right had been violated, and the district court sided with Boston. Camp Constitution appealed to the Supreme Court of the United States which granted certiorari. In a scathing 9-0 decision, the justices reversed the lower court and declared that Boston’s discrimination against a certain group based on religious viewpoints was a blatant violation of the First Amendment. Boston’s concern that the flag would be mistaken as government sponsored religion was totally unfounded. “To avoid a spurious First Amendment problem, Boston wound up inviting a real one.” J. Gorsuch concurring opinion, Shurtleff v. Boston, Op. No. 20–1800. (May 2, 2022).

The justices typically diverge on viewpoints, but in this particular case they were united across a wide spectrum of legal philosophies and political leanings. Justices Breyer, Roberts, Sotomayor, Kagan, Kavanough, and Barrett joined in the majority opinion, while Justices Kavanaugh, Alito, Thomas and Gorsuch joined in various concurring opinions. The language in this decision was similar to the Kennedy case from earlier this year.